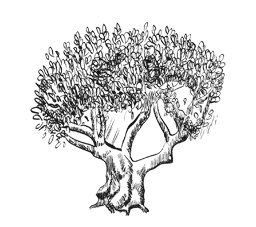 FROM THE SAME LOVE OF OUR ANCESTRAL LANDS COMES OUR SPECIAL OLIVE OIL.

We grow Tonda Iblea olives using the same agricultural techniques that we use to make our wines. For us, there is only one path that we can take. Olive oil, just like wine, is a question of culture and history and goes back to the ancient traditions of our ancestors. Our trees are ancient as well. Some are hundreds of years old. We have 18 hectares in the contrada of Piraino in the area around Chiaramonte Gulfi. We manually harvest all the olives, respecting the tress and their fruit. We use the same techniques of those who came before us and we want to continue to pass them down through the generations. The olives are harvested and immediately are sent to the mill for cold pressing the same day. The result is oil made with Tonda Iblea that holds its color, aromas of peppers and tomatoes, which is persistent but not invasive and has great acidity. It is also slightly spicy. We follow tradition and bring in into the future. This is COS olive oil.

Giusto Occhipinti of COS is a benchmark producer in the Vittoria appellation of Sicily, and certainly one of the most important and influential producers in all of Sicily if not Italy as a whole. The winery was founded in 1980 by three friends, Giambattista Cilia, Giusto Occhipinti, and Cirino Strano. The initials of their last names form the winery’s name.

The winery itself dates back to the 1880’s during a period in which there was huge demand for Sicilian wines. Phylloxera had already devastated many of the world’s top wine growing regions but it had not yet reached the island. Sicily has a long history of winemaking, dating back to the 8th century BC when the Greeks first planted grapes in the eastern part of the Island. It is only more recently though that true top quality wines and winemaking have arrived there. It was through the hard work and dedication of producers such as COS who showed the potential of Sicily’s terroir and drew attention to the island, especially its ability to produce complex, pure and fresh wines, despite its location at the very southern tip of Italy.